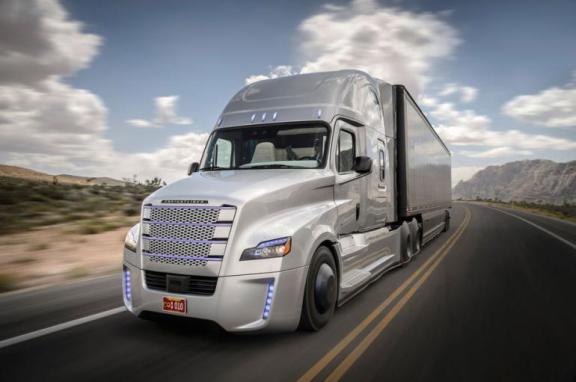 Driverless Lorry Convoys to Have Trials on Britain's Roads Next Year

In the tests convoys of up to three heavy goods vehicles will steer, brake and accelerate in sync. In an attempt to allay public fears, however, ministers will today stress that every vehicle taking part in the trials will also have a driver on standby to take over.

Supporters say the ability to connect HGVs in automated convoys has the potential to drive down costs and cut carbon emissions as well as increasing road capacity. The lead vehicle pushes the air aside, allowing those a short distance behind to travel more efficiently in the slipstream.

The head of Britain’s Highways Agency said that the HGV tests would pave the way for the introduction of driverless cars.

The introduction of “live” road tests of the technology threatens to be controversial, however, with safety questions remaining including how far the vehicles in the convoy should be from one another and how fast they should travel.

Although the advent of driverless technology is deemed inevitable by many governments and manufacturers, safety concerns remain. A government-backed study suggested that human drivers may take as long as a minute to regain control of a vehicle coming out of automated mode.

Track tests will be carried out in the first phase of the trials to help determine whether the convoys can be safely tested on motorways. Full road tests will take place before the end of 2018.