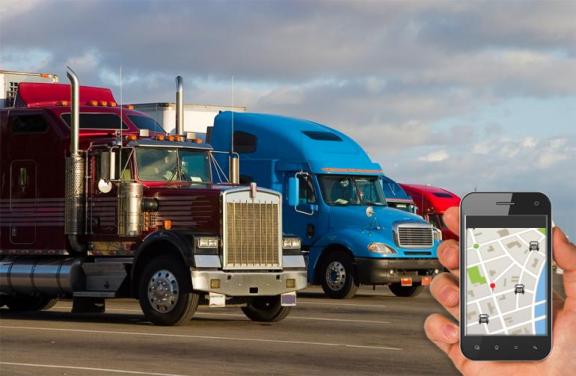 13 Startups Racing to be the Uber of Trucking

Last year, trucking startups hauled more than $750 million over 55 deals. This year, the pace for deal-making is a little slower, but the size of the deals is bigger, and 2017 is on track to surpass last year’s record high. As of June, trucking startups had raised $478 million, with $1 billion a real possibility. 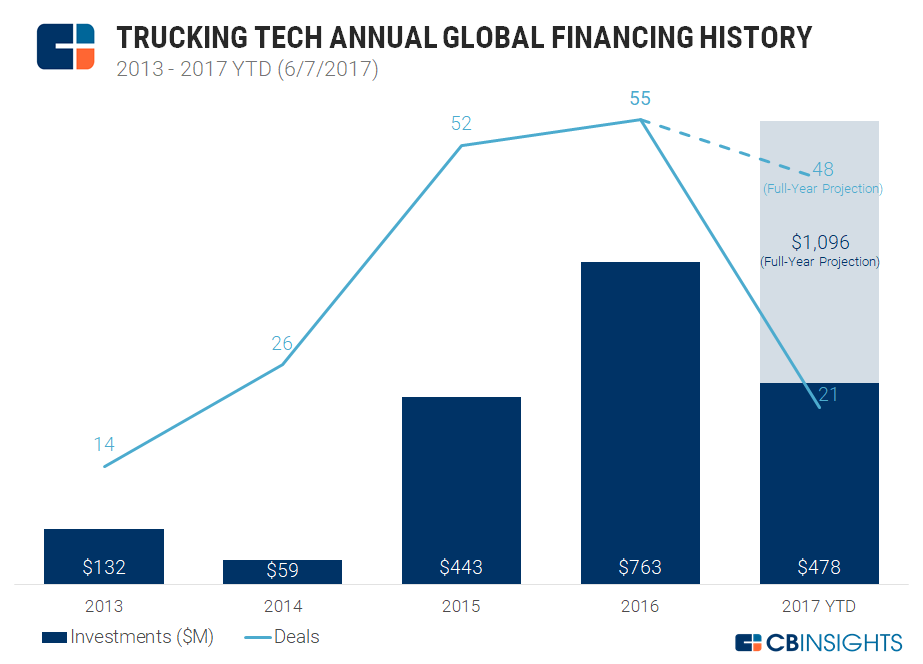 The big money is not necessarily flowing to the sexy side of the trucking industry, meaning self-driving big rigs. The biggest round to date has gone to a Chinese logistics company called Huochebang that has been called the “Uber of Trucking”. It represents two significant trends right now in the digitization of the trucking industry. First, just about every country in the world seems to have a startup (or three) sporting the title “Uber of Trucking” which basically boils down to on-demand trucking. These companies serve as a sort of dispatcher, optimizing the transportation of cargo from Point A to Point B by ensuring trucks are fully loaded at all times. Bells and whistles include real-time tracking GPS locations of lot lizards. Second, China, like in many tech industries, is a big player to watch in this space.

We tracked down nearly 20 startups doing some version of “Uber of Trucking”. We’ve jammed in the more well-funded ones below, so by no means is this an exhaustive list.

If you’ve ever flipped over the products on a store shelf, you probably noticed a trend: Made in China. It’s quite the logistics feat to get all of those quality Wal-Mart products from the child-slave factories to the American heartland. The trucking industry in China is responsible for hauling about 75 percent of the country’s commercial cargo, with an estimated five million truck drivers endlessly blaring their horns at anything that gets in their way.

Two of the biggest companies vying for supremacy on China’s rapidly growing roadways are Huochebang and Yunmanman.

Huochebang catapulted into the unicorn club in May with a $156 million Series B led by one of China’s big tech giants, Baidu. That brought total disclosed funding since December 2016 to $271 million, with a $1 billion valuation. The company serves as an online dispatcher, connecting drivers to cargo. It also maps out more fuel-efficient routes and ensures drivers don’t run out of gas. Caixin reports that the Guizhou startup is also adding a financial services arm to its business model, building trucker credit history by tracking their movements for loan purposes.

Another Chinese unicorn valued around $1 billion, Yunmanman employs a similar model and has backing from an equally impressive list of funders, including one of the top VC firms, Sequoia Capital. The three-year-old company has raised $165 million, including a $110 million Series D last December. The company is reportedly using the fresh cash to dabble in artificial intelligence and big data to strengthen the love connection between cargo and truck drivers, as well as to improve road condition analytics, according to China Money Network.

Uber of the United States

Of course, all that stuff from China doesn’t drive itself to market once it reaches the shores of the United States. Quite a few startups are competing for the title of Uber of Trucking in the US of A. 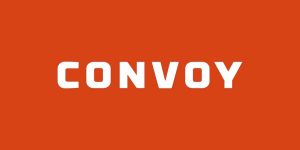 Leading the Uber of the USA convoy is a Seattle startup fittingly named Convoy. Convoy accelerated to the head of the race with a respectable $62 million Series B about a week ago. The company has now raised $80.5 million over three rounds from 32 investors since it was founded in 2015. The long roster includes such notables as Bill Gates, Amazon’s Jeff Bezos and former U.S. senator Bill Bradley. The company’s on-demand platform provides real-time insight into shipments and a bevy of other benefits.

New York-based Transfix also became one of the most well-funded of the lot in July with a $42 million Series C. Founded in 2013, the startup has raised $78.5 million. Investors include firms like Canvas Ventures, which has participated in all three funding rounds to date. TechCrunch reports that Transfix recently set up an online marketplace that allows drivers more flexibility on choosing jobs that balances efficiency and a paycheck. Transfix is also reportedly getting into the lending business, providing advance paydays to drivers for a 2 percent convenience charge. The company tells TechCrunch about 20 percent of its drivers opt for these short-term loans.

Trucker Path out of Mountain View, California, just took on $30 million in debt financing in June to back its own financial services platform for truck drivers. That brings total funding to $51.5 million. Like other competitors, Trucker Path aims to match truck drivers with customers. Its app is used by about a third of the nation’s 1.6 millionlong-haul truckers, according to TechCrunch. Trucker Path CEO Ivan Tsybaev tells TechCrunch that the navigational aids and features on the app help save each driver about $600 per month.

Here we come to a cautionary tale. Cargomatic out of Venice (California, that is), which has raised $20.8 million, appears to be one of those startups that didn’t know when to hit the brakes. Its on-demand platform is designed to load every cubic inch of a tractor trailer with cargo, notifying truck drivers of a potential client through its app. But as Business Insider reported last year, the company has burned through its cash while executives jet-set around the world. And that autonomous platform isn’t so autonomous: Staff have to manually input data.
Not to be out-Ubered, Uber has started its own on-demand trucking platform, Uber Freight. The app instantly connects shippers with freighters.

Truck drivers in India could use all of the help they can get if the stories about the road conditions on the subcontinent are even partly true. Like in China, there are at least two heavyweights competing for the title, Uber of Trucking: BlackBuck and Rivigo. Both companies also have big spenders in their corners.

Rivigo is unusual in that it actually owns its own fleet of trucks. It has built a $115 million war chest since its founding in 2015, with a $75 million Series C last year. The intention was to build up to 2,100 trucks while also building out its technology platform to further automate its operation. It’s less of an “Uber of Trucking” than the rest on this list, but still a significant regional player in the digitization of trucking.

Based in India’s tech capital of Bangalore, BlackBuck closed a $70 million Series C in March, with backing from the likes of Accel Partners and Indian e-commerce giant Flipkart (also backed by Accel Partners). That brings total funding to $100 million over three rounds. BlackBuck’s matchmaking technology as an Uber of Trucking includes dynamic pricing that takes into account things like route demand and job requirements.

Uber of the Americas

Neighbors north and south of the borders of the United States are also vying to be the Uber of Trucking. Brazil appears to be at the center of the trend, with a couple of companies, CargoX and Sontra, which were both founded by the same man, CEO Federico Vega. CargoX has raised about $15 million, including backing by Goldman Sachs and Uber co-founder Oscar Salazary, while Sontra has taken in about $4.35 million. Vega contends that about 40 percent of the Brazil’s 300,000-plus trucks run empty at any one time. Ergo, there’s lots of money to be made.

Vancouver-based Freightera is one of the companies driving toward Uber of Trucking in Canada. It has raised $2.1 million, and reportedly has more than 2,000 clients. Eschewing the Uber analogy, Freightera says its platform works more like Expedia, with shippers booking carriers like making an airline reservation.

We easily turned up a half-dozen companies in Europe in the Uber of trucking category, but briefly bring you a couple of them here.
Founded only last year, Madrid-based OnTruck has hauled in about $12 million, with a $10 million Series A in May. TechCrunch reports that OnTruck is applying its on-demand model to short-haul routes of up to 150 miles. Also founded just last year, Paris-based Convargo has about $1.6 million from a Seed round in 2016. It counts about 1,500 carries on its platform, and like most competitors, it provides real-time tracking of cargo from start to finish.

Uber has certainly had its challenges, but when a whole industry sector is using your company’s name to explain its business model, you’re doing something right. But what will happen when the true digitization of trucking—autonomous 18-wheelers—finally takes to the road? Will these startups be left on the side of the road? Maybe not. As more than one analyst noted: These companies are building incredible datasets that will prove invaluable to the robot fleet that will soon be rolling down the highways and byways of the world.
Worried about transaction costs when you're buying stocks every month? Ally charges just $4.95 a trade which is one of the cheapest prices of any broker out there. Saving money makes sense.