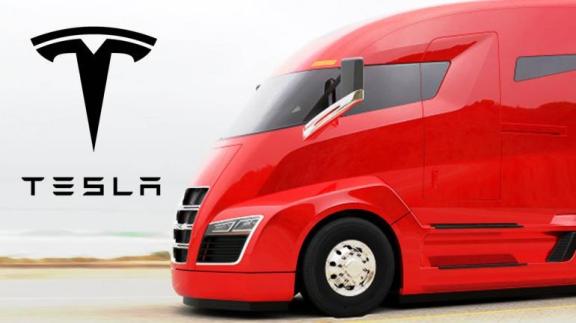 Tesla just unveiled its new electric 500-mile-range Semi Truck, which could revolutionize the transportation world. Semi trailer trucks move goods all over the country, and without them we’d never get our stuff as fast as we do now, but they come with one big disadvantage – emissions. Today’s trucks are powered by dirty diesel engines that emit a large portion of the harmful pollutants in our air, but that could soon change.

Not only does the Tesla Semi have a driving range of 500 miles, but it can also reach 60 mph in five seconds without a trailer, which is a fraction of the time that it takes for a comparable diesel truck. With an 80,000 pound load, Tesla estimates that the truck will reach 60 mph in 20 seconds, which normally takes a diesel truck about a minute. The Tesla Semi requires no shifting or clutching for smooth acceleration and deceleration, and its regenerative braking recovers 98% of kinetic energy to the battery, giving it a basically infinite brake life.

Even with a 500 mile driving range, drivers will need to find a place to recharge their Tesla Semi, so Tesla has announced new Megachargers that will add about 400 miles in 30 minutes.

Inside the Tesla Semi’s cabin is designed specifically around the driver, with full standing room inside, and a centered driver position for better visibility. The driver also has two touchscreen displays positioned symmetrically on both sides that provide access to navigation, blind spot monitoring and electronic data logging. The Tesla Semi can also travel in a convoy, where one or several Semi trucks will be able to autonomously follow a lead Semi, making it even easier for the driver to travel long distances.