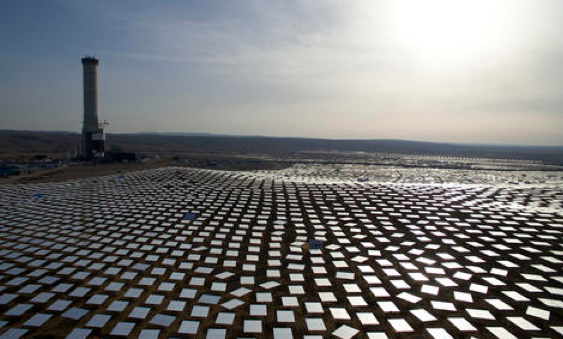 In sunny Israel, solar energy supplies only a small percentage of the nation's power needs, leaving it far behind countries with cloudier and colder climates. Now the fledgling solar power industry is trying to make a leap forward with a large-scale project boasting the world's tallest solar tower, as a symbol of Israel's renewable energy ambitions.

With Israel traditionally running its economy on fossil fuels, renewable energy has long been hobbled by bureaucracy and a lack of incentives. But the country is starting to make an effort, setting a goal of generating 10 percent of its energy from renewable sources by 2020, up from the current 2.5 percent.

The Ashalim project, deep in the Negev desert, is made up of three plots, with a fourth planned for the future, each with a different solar technology. Together, the fields will be Israel's largest renewable energy project when completed by 2018. They are set to generate some 310 MW of power, about 1.6 percent of the country's energy needs — enough for about 130,000 households, or roughly 5 percent of Israel's population, according to Israel's Electricity Authority.