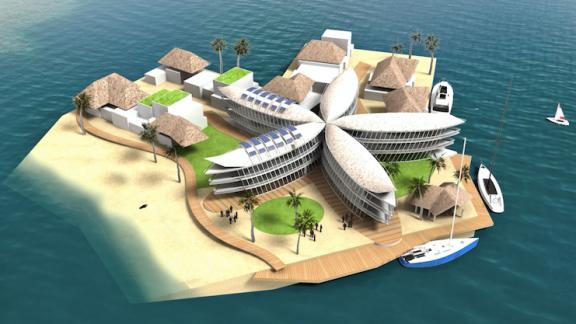 Construction of the world’s first floating city may begin soon off the coast of Tahiti in French Polynesia.

ABC News reports the country’s Government has signed an agreement with the USA’s  Seasteading Institute and construction could commence in 2019.

“So much of the world — places like Kiribati and many of the islands of French Polynesia — are threatened by rising sea levels,” said the institute’s executive director, Randolph Hencken

“We are planning to spin off a new industry of floating islands that will allow people to stay tethered to their sovereignty as opposed to having to flee to other countries.”

The Institute is comprised of self-described “credentialed, qualified, pragmatic idealists”.

A study carried out for the Institute in 2013-14 found that enough water could be collected from a floating city to meet requirements; depending on location of the project. Based on the amount of available rooftop space, the study also determined solar panels could meet electricity needs more cheaply than diesel-based generation, even after adding the costs of a microgrid – including battery storage.

Given the advances and cost reductions in solar and storage technology since then, it’s safe to assume taking the solar + battery route would now be even more economical.