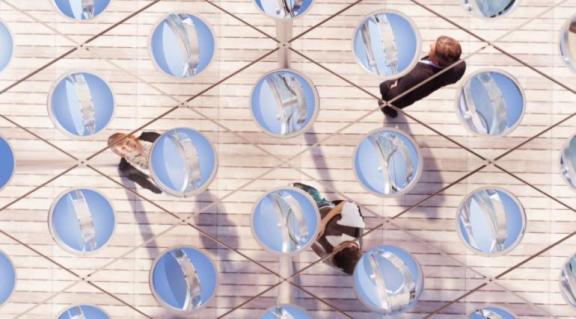 In a beautiful marriage of form and function, architect and designer, Carlo Ratti has created a light-reflecting canopy that both creates shade and directs sunlight to a photovoltaic panel where it generates electricity. Called Sun&Shade, the canopy is built with mirrors that rotate automatically with the movement of the sun and reflect its rays to a solar PV panel “located a safe distance away.” Ratti just unveiled the Sun&Shade prototype at Dubai’s Museum of the Future, as part of an exhibit called “Reimagining Climate Change.”

Ratti is no stranger to the world of functional eco art, with past projects that include: a “supermarket of the future,”  his Paris “coolhouse,” and the New Holland pavilion at the 2015 Milan Expo. Of his latest creation, Ratti says his inspiration came from the architectural traditions of the Middle East. “In developing Sun&Shade we were inspired by the Middle Eastern tradition of shadowing in architecture and public space,” Ratti explained in a press release. “Sun&Shade aims to bring this concept to the next level, allowing shadowing to be digitally controlled.”