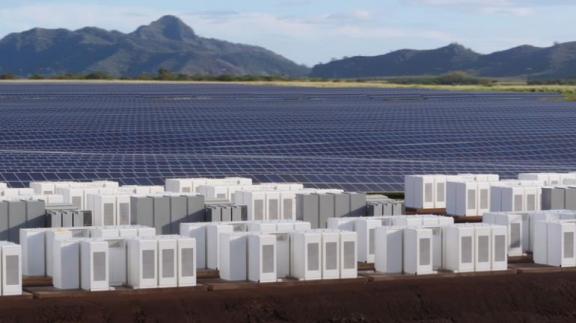 Islands in the Pacific Ocean are some of the most practical places to install solar panels. Since there’s no natural gas pipeline or rail line to haul in coal, islands like Kauai in Hawaii have traditionally generated electricity by shipping in many barrels of diesel fuel.

These days, because so many residences and businesses have installed solar power, there’s a greatly reduced need to burn fossil during the day — but at night, the generators kick in. Tesla wants to change all that, with a massive new solar farm and energy storage project on the island.

Much of renewable energy generation is intermittent: wind and solar power generation peaks are often around times of low demand. So Tesla (which changed its name from Tesla Motors last year largely because of projects like this) offers the Powerpack, a massive battery that can store electricity during the day when supply is abundant, and discharge it when demand goes up after the sun goes down.

The Kauai project consists of a 52 megawatt-hour battery installation plus a 13 megawatt SolarCity solar farm. Tesla and the Kauai Island Utility Cooperative, the power company that ordered the project, believe the project will reduce fossil fuel usage by 1.6 million gallons per year.

Like with the solar/battery microgrid installed on the island of Ta’u in American Samoa last year, the KIUC project uses Tesla’s Powerpack 2 battery system, built at Tesla’s Gigafactoryin Nevada.

KIUC didn’t purchase the solar panels and battery system from Tesla outright. Instead, the utility contracted with Tesla to purchase electricity. There’s a 20-year contract in place to buy the solar-generated power for 13.9 cents per kilowatt hour — in effect, Tesla is now in the power generation business.