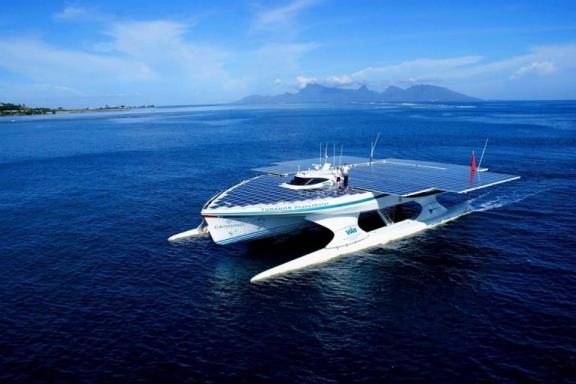 A Swiss-based charity, Race For Water Foundation, wants to turn the PlanetSolar catamaran into a floating display of emerging hydrogen technologies.

"That's unprecedented on a boat," says Alexandre Closset, CEO of Swiss Hydrogen. "For the first time, a full hydrogen chain will be installed on a boat."

The electric vessel, the first to circle the globe on solar power in 2012, will be departing from the French city of Lorient on April 9, to raise awareness about plastic pollution in oceans.

So how does it work? The vessel pumps seawater, which is then desalinated and purified. "Electrolyzers" powered by solar panels split H2O molecules into oxygen and hydrogen, which is then stored and compressed in bottles, ready to be injected into fuel cells. Thus, the vessel produces energy but emits nothing but water vapor.