Stream Energy is also one of the oldest forms of energy and is a very predictable, very location specific energy source. The use of water power dates back thousands of years to the water wheels of Ancient Greece, which used the energy in falling water to generate power to grind wheat.

The complications of developing stream energy are significant and vary depending upon whether an in-stream or barrage approach is taken. The in-stream rotor seems to be the commonly accepted approach and there are a number of devices in development at present, with a few at the commercial deployment stage.

We now are presented with an opportunity to develop a new generation of water power, one that will harness the abundant energy of our oceans and rivers.

Hydrokinetic technologies produce renewable electricity by harnessing the kinetic energy of a body of water, the energy that results from its motion. Since water is 832 times denser than air, tides, waves, ocean currents, and free-flowing rivers represent an untapped, powerful, highly-concentrated and clean energy resource.

Hydro Power turbine was developed to produce a maximum amount of electrical power with the kinetic energy of flowing waters. Stream Energy is powered by kinetic energy instead of potential energy.

As such, no dams and/or head differential are necessary for the operation of this device; the course of a river remains in its natural state and no high investments in infrastructure are required. Because the amount of kinetic energy (velocity) varies from river to river, a greater amount of energy is generated with a higher velocity of water flow.

Emerging stream resource prospects for hydrokinetic energy development include Ocean/Sea currents, such as the Gulf Stream or Straits of Istanbul and Canakkale, which result from winds and equatorial solar heating; free-flowing rivers, from which energy capture is possible without any intrusive dams; and even constructed waterways, such as irrigation canals. 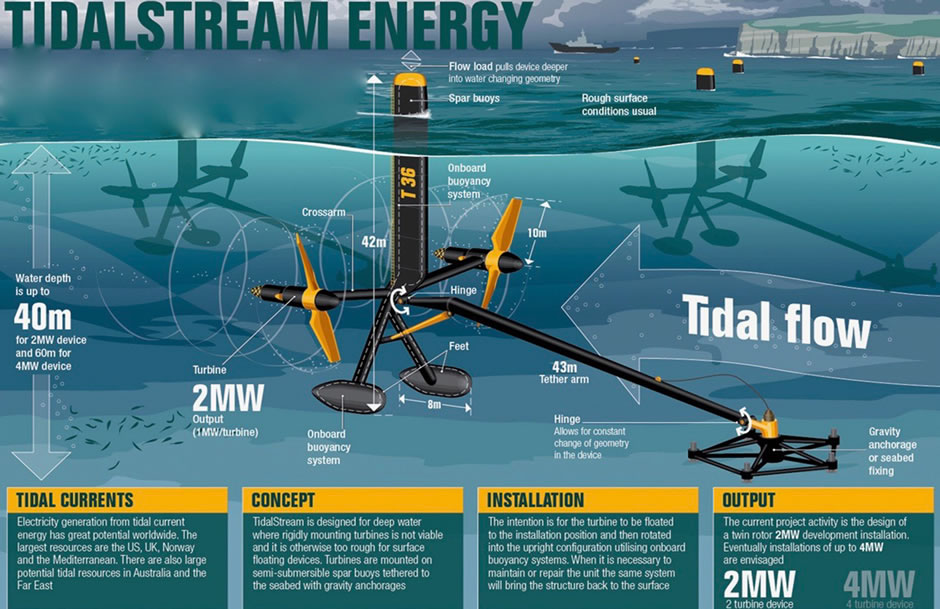 The surplus of water therefore flows through the Bosphorus into the Marmara Sea. Thus two flows through the straits are formed. The upper flow leaves the Black Sea and carries surface water out of it. Meanwhile a bottom flow carries salt water, about 35‰ from the Mediterranean to the Black Sea. The salty water mixes with the waters of the basin proper and that results in a comparatively low salinity at the surface, about 17,5 – 18‰. The volume of the bottom flow is about 300 cubic km, roughly half of the surface flow.

The surface salinity varies with the season. Vertically salinity starts increasing at a depth of 50 m; at 200 m it is considerable, but below 200 m it increases at a much slower rate. The composition of salts in the Black Sea water is identical to that in the oceans. The Black Sea waters contain considerable amounts of nutrients, particularly the nitrogen and phosphorus compounds that enter the sea via the rivers. While the temperature of surface waters varies considerably throughout the year, below the surface, vertically the change in temperature is rather unique. The minimum in temperatures is at a depth of 50 – 60 down to 80 – 90 m.

The vertical distribution of salinity and temperatures determine the density of seawater. Because of the specific characteristics described above, the Black Sea has two distinct water layers: the lighter upper layer from 0 to approximately 200 m deep and the heavier lower layer from 200 m down to the seabed. This stratification of waters causes weak vertical circulation within them. The waters from the two layers do not mix very easily and that fact has an enormous influence on life in the sea.

In the entire Black Sea at a depth greater than 150 – 200 m there is a permanent hydrogen sulphide zone devoid of life. Oxygen is completely absent at this level. Oxygen rich surface waters supporting life in the sea constitute only about 13% of the Black Sea volume. These features influence the condition of the marine environment and the diversity of organisms depending on it. They are the key to the character and the problems of the Black Sea’s environmental health.

The replenishment of waters in the Black Sea through the Bosphorus is an extremely slow process and the full cycle takes hundreds of years. In addition to that hydrogen sulphide is present in the entire lower layer of the Black Sea, which makes it the largest anoxic water basin in the world with its unique hydrological characteristics determining the condition of its biodiversity.

It’s amazing to think of raising the Black Sea basin by 140 m. What that means, if you calculate how much water went into the Black Sea, it would be equivalent to lowering the world’s oceans by approximately one foot.

SEND US A MESSAGE

As TTT Global, we invest in the wide range categoires of energy, technology, media and startup projects in 40 countries worldwide.

TTT Global has a client centric business model that gives us the agility to deliver the full range of our services globally.

As TTT Global, we are aware that the work structure of each business is unique to itself.

As TTT Global, we believe in the soul of StartUps and Incubation.